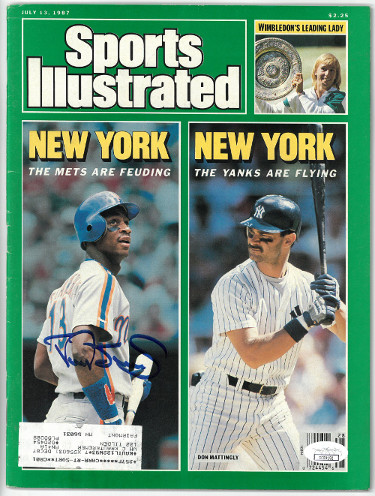 Darryl Strawberry was well known for his play on the field and for his controversial behavior off it. Throughout the 1980s and early 1990s, Strawberry was one of the most feared sluggers in the game, known for his prodigious home runs and his intimidating presence in the batter's box with his 6-foot-6 frame and his long, looping swing that elicited comparisons to Ted Williams. During his 17-year career, he helped lead the New York Mets to a World Series championship in 1986 and the New York Yankees to three World Series championships in 1996, 1998 and 1999. A popular player during his career, Strawberry was voted to the All-Star Game eight straight times from 1984-1991. Darryl Strawberry has hand signed this New York Mets Sports Illustrated Full Magazine from July 13th, 1987. JSA Hologram #CC09152 and Certificate of Authenticity.